Speak to a Cambodia expert

How to do Angkor?

What's New in Cambodia in 2020. The latest hotel and resort openings and developments in Cambodia. 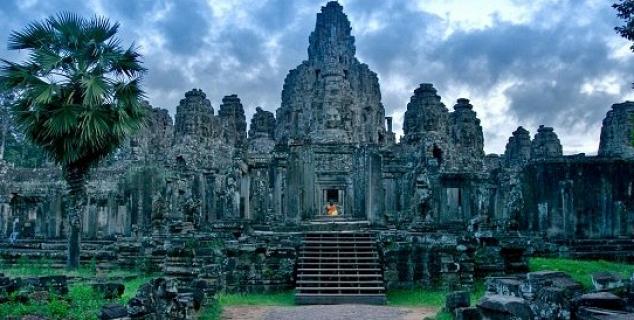 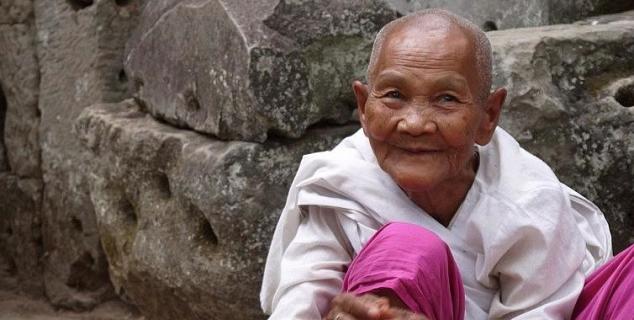 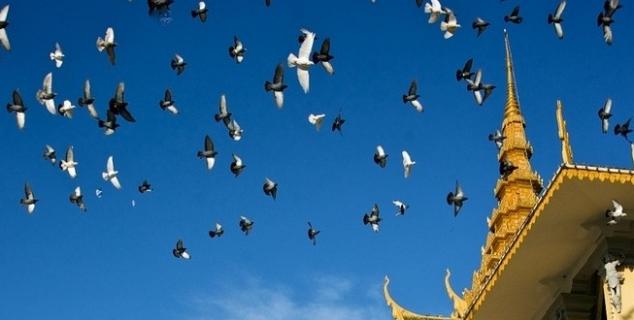 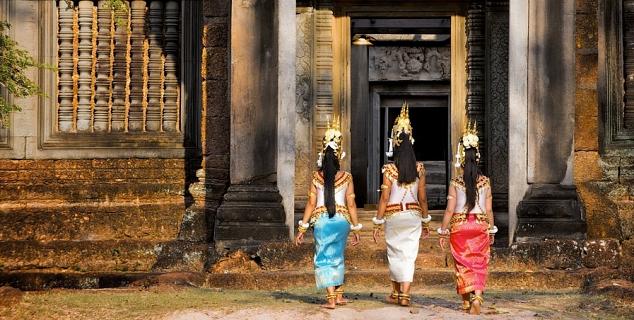 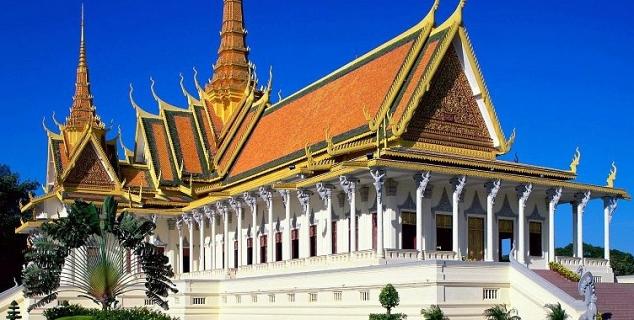 This Highlights of Cambodia Itinerary focuses on the two main destinations in Cambodia - Siem Reap and Phnom Penh.

From Phnom Penh journey northwards by car to Kampong Cham for a taste of what awaits further north at Angkor.

Enjoy a stop at the spider market in Skuon and try a deep fried tarantula if you dare.

At Siem Reap explore the incredible temples of Angkor, one of the most spectacular sights in Asia with the ruins of the ancient Khmer capital emerging from the Cambodian Jungle.

Spend 3 nights in Siem Reap with two full days to explore the temples.

On arrival in Phnom Penh you will be met and transferred to your hotel. Enjoy the rest of the day at leisure.

Enjoy a full day's sightseeing in Phnom Penh including a visit to Tuol Sleng and sights in the city including Wat Phnom and the Silver Pagoda.

Enjoy a morning visit to the Killing Fields with the afternoon at leisure to explore Phnom Penh independently, visit the markets or perhaps enjoy a spa treatment.

In the afternoon travel on to Kampong Thom and visit Phnom Santuk.

Enjoy sightseeing around Kampong Thom before continuing the journey northwards to Siem Reap.

Enjoy a full day’s sightseeing in Angkor, the highlight of any tour of Cambodia.

Today visit Angkor Wat, Angkor Thom, spectacular Ta Prohm and round off the day with a visit to a temple for sunset.

This is a great way to break up exploring the temples and offers an insight into life in rural Cambodia.

This morning is at leisure and is a great chance to explore Angkor independently.

Alternatively add on a morning excursion to Angkor or to one of the outlying temples such as Beng Mealea.

Arrive back in UK.

Arrive in Phnom Penh and transfer to your hotel. Enjoy the rest of the day at leisure.

A Full Day Tour to discover lively and energetic Phnom Penh where graceful tree-lined boulevards and riverfront promenades are reminders of bygone eras; today they teem with life and activity.

The adjacent Silver Pagoda and the National Museum are the next stops.

In the afternoon, learn about a chapter from Cambodia's more recent, tragic, past at Tuol Sleng (Museum of Genocide).

Formerly a High School, in 1975, this became the interrogation and torture facility for the Khmer Rouge regime.

Kept largely unchanged, this prison now showcases photographs and exhibits about the thousands of victims that passed through these doors - only seven of whom came out alive.

Finally, explore the modern-day city, visiting one of Phnom Penh's two great markets, the Central Market, or the sprawling Russian Market, a labyrinth of stalls selling all kinds of items.

Just outside Phnom Penh, in a peaceful rural setting, the Killing Fields of Choeung Ek provide a stark reminder of the atrocities inflicted on Cambodia under the Pol Pot regime.

Thousands of people were killed here between the years of 1975 and 1978 and buried in mass graves.

Although this morning excursion seems quite a ‘morbid’ trip, it is for most visitors a quite moving experience and an important step in understanding modern day Cambodia where almost every family was in some way affected by the Pol Pot regime.

In the afternoon travel on to Kampong Thom and visit Phnom Santuk.

Enjoy sightseeing around Kampong Thom before continuing the journey northwards to Siem Reap.

Visit Angkor Wat, the crowning jewel of Khmer architecture. Angkor Wat is the national symbol and the highlight of any tour of Cambodia.

The largest, best preserved, and most religiously significant of the Angkor temples, Angkor impresses visitors both by its sheer scale and beautifully proportioned layout, as well as the delicate artistry of its carvings.

Angkor Wat is stunning at any time of the day, but sunrise and sunset are especially beautiful times to watch the play of light on the stones.

Visit Sras Srang, a basin opposite Banteay Kdei measuring 800 by 400 metres with a tiny island in the middle where only the stone base remains of what was once a wooden temple.

The fortified city of Angkor Thom covers an area of 10 sq. km. Enclosed by a wall and wide moats, Angkor Thom includes many of Angkor's most popular sights.

Enter by the monumental South Gate over a causeway lined on either side by statues of demons and gods, each carrying a giant Naga.

Visit the ruined Baphuon, Royal Enclosure and Phimeanakas before continuing to the mysterious Bayon Temple, one of the most popular and compelling in Angkor.

Explore the galleries of beautifully preserved bas reliefs and ascend narrow stairs to reach the central sanctuary, where you will find giant stone faces smiling enigmatically down at you from every angle.

Banteay Kdei Temple is a massive Buddhist temple dating from the second half of the 12th century, surrounded by four concentric walls.

Finally, visit Ta Prohm, one of the most popular attractions of Angkor as much of the jungle has not been cleared and it looks very much as most of the Angkor monuments would have appeared when European explorers first stumbled across them.

Watch the sun set over the Cambodian countryside from the upper terraces of an ancient Angkorian Temple.

This Full Day Tour offers an authentic look at the lifestyles of the residents of Tonle Sap, Cambodia’s largest freshwater lake, just a short distance from Siem Reap and one of Cambodia's most beautiful sights.

Visit a remote village where few tourists venture and embark on a boat ride through the village of Kampong Phluck where the fisherman and their families live in stilted houses among the petrified mangrove forests and waterways.

Enjoy a lunch of local dishes in a family’s house and enjoy the fascinating scenery of Southeast Asia’s largest freshwater lake.

Return to Siem Reap by boat and private vehicle in the afternoon.

NOTE: Due to low water levels during the dry season, the boat trip is only possible from June to March. However a visit to an alternative floating village at Chong Kneas can be arranged instead.

Alternatively we can arrange for an excursion to some of the outlying temples of Angkor or to an evocative temple such as Beng Mealea.

Arrive back in UK.

Is this a Private Tour or a Group Tour?

All of our tours are private tailor made itineraries, customised for you - we can amend things to entirely suit you.

You will have your own private car, driver and guide on excursions.

What are the departure dates?

Let us know your preferred dates of travel and we will find the best and most suitable flights to fit your itinerary.

As this is a private tour, there are no set departure dates.

Which Airlines do you use?

We work with all the major airlines flying to this part of the world.

Typically for Cambodia, Thai Airways, Singapore Airlines, Emirates or Vietnam Airlines would be airlines we would often use.

However, just let us know your preferred airline if you have one. We can organise flights from any regional destination in the UK.

There are no direct flights from the UK to Cambodia currently.

Which Hotels do you use?

We're careful with our choice of hotels, but we're guided by our customers also. If you have some preferred hotels, just let us know.

We specialise in boutique hotels and so we will often suggest some of our favourite smaller hotels where we think these will be suitable.

We keep on top of hotel developments in Cambodia from our office in Vietnam and regularly inspect the hotels we use.

Do you cater for Solo Travellers?

Yes, we have many solo travellers and Cambodia is a very safe, friendly and welcoming destination for those travelling alone.

River cruises on the Mekong in Cambodia are a popular option for solo travellers, especially with Pandaw Cruises who offer no Single Supplements on many departures.

How long have you been organising holidays to Cambodia?

We've been organising tailor made holidays to Cambodia for over 10 years.

Our team has a wealth of combined experience in the industry and our Director has been involved in organising holidays to Cambodia since the early 1990's - whilst Pol Pot was still living in the jungle close to Siem Reap.

Our partners on the ground in Cambodia have over 20 years experience in operating there.

They understand the country extremely well and have a strong infrastructure of staff, guides and vehicles within Cambodia. We've had the same partnership for over 10 years.

Where can I combine a holiday to Cambodia with?

Many people visit Cambodia as a stand-alone destination although once you are away from Phnom Penh, Siem Reap and Sihanoukville, the infrastructure and accommodation is nowhere near as developed.

Combining Cambodia with neighbouring Thailand is another popular and easy option.

A Mekong River Cruise between Vietnam and Cambodia is a superb way to combine both destinations.

To view a sample holiday, click on one of the links below. This will open the itinerary up in a new window.

All of our Cambodia Holidays are completely tailor made and we can put together any kind of itinerary to suit your interests and budget.

We have many other options so if you have a particular hotel in mind just let us know and we'll put together a price and itinerary for you.