How to do Bhutan?

Speak to someone who's been.

Get inspired by Bhutan with this short Land of the Thunder Dragon video... 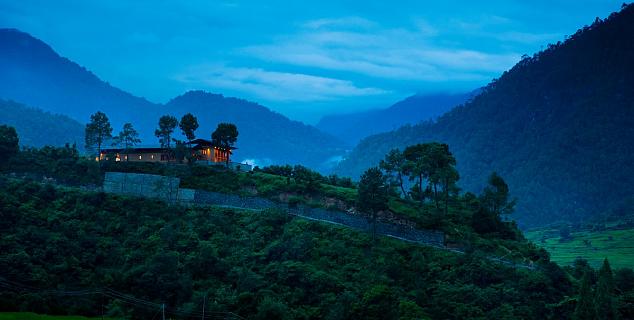 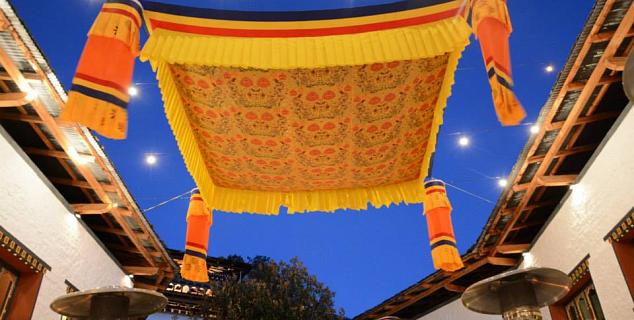 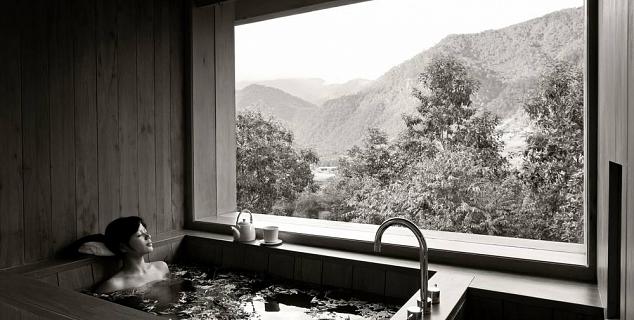 Bathing with a view 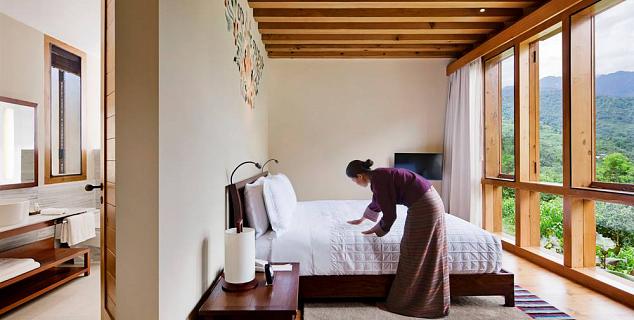 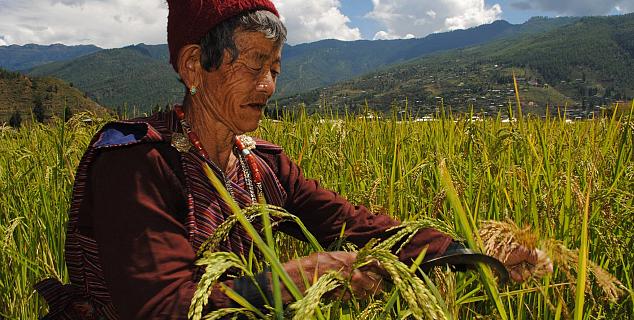 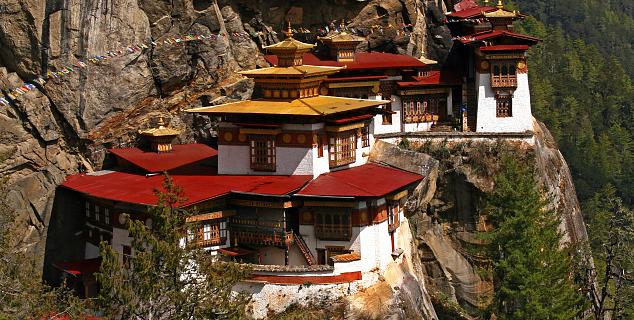 This seven-night trip is an exploration in the heart of the ethereal Himalayan kingdom of Bhutan.

From the gravity-defying Tiger’s Nest Monastery to the temple of the Divine Madman, this trip combines spectacular drives, unique nature walks and fascinating monastery visits.

Journey deep into Bhutan’s heartland exploring three distinctly different but important valleys: the bustling capital of Thimphu in a valley dotted with monuments, museums and markets, the tropical Punakha Valley with its magnificent dzongs, and the emerald valley of Paro, with its rice paddies and ancient temples.

This Bhutan tour can easily be extended with several different options, including India, Nepal, Singapore or Thailand.

On arrival in Bangkok you will be met and transferred to your hotel in Bangkok.

Transfer to the airport for the flight to Bhutan.

On a clear day, the flight to Paro is breathtaking, with views of major Himalayan peaks such as Everest, Kanchenjunga and Makalu, and on the final approach Bhutan’s own snowy peaks, the sacred Chomolhari, Jichu Drake and Tserimgang.

On arrival you will be met and transferred the short distance to Uma by COMO, Paro.

After check-in and some time settling into your new surroundings, enjoy a first foray into the Himalayan kingdom, with sightseeing in Paro town and a temple visit.

This afternoon trip offers gradual acclimatization to the rarefied air at this altitude as well as the chance to get to know your guide.

Today travel from Paro to the Punakha Valley via Thimphu and Dochu La.

Bhutan’s capital Thimphu is sprawled across the wooded western hillside of the Wang Chhu River, and is Bhutan’s centre of government, religion and commerce.

During the journey from Uma Paro to Uma Punakha, stop off in Timphu an enjoyan immersive tour taking in some of the major attractions, including the Buddha Dordenma statue, the National Memorial Chorten, a view of Trashi Chhoe Dzong and the Folk Heritage Museum.

After leaving Thimphu, the drive to Punakha is spectacular, winding snake-like up the

Today’s drive should take around 3 to 4 hours.

Today is a full day of exploration through the lush Punakha Valley, which at 1,200m is low enough for bananas and oranges to grow!

The morning begins with a short walk across farmhouses and rice paddies to reach Chimmi Lhakhang, a 15th-century fertility temple dedicated to Drukpa Kuenley, a Tibetan Buddhist saint, perhaps better known as the ‘Divine Madman’.

This site has long been a pilgrimage for couples hoping to start a family.

Heading further down the valley, the 300-year-old Punakha Dzong comes into view.

Built in the 17th-century by Zhabdrung Ngawang Namgyal (who founded the Kingdom of Bhutan), the fortress once housed the country’s government. It is now the winter home of Je Khenpo, the head abbot of Bhutan, along with a retinue of 1,000 monks.

After lunch, the tour takes you on a walk through homesteads and farmland to Khamsum Yulley Namgyal Chorten, a shrine recently built by the royal family.

After breakfast drive to Chorten Ningpo, which dates back to the 17th-century.

The chorten is a little-known spot with a magnificent statue of Maitreya (the future Buddha) and images of the great lamas of the Drukpa lineage.

This magical spot was once a dense forest believed to be inhabited by evil spirits. The great oak tree outside the monastery is said to have grown out of the blazing log that the ‘Divine Madman’ threw (the tree’s bark is still black from where it was burnt).

In 2005 the monastery began to house orphans from the nearby village, and founded a small Buddhist educational institution where the children can study both traditional Buddhist scriptures and texts as well as Western subjects.

The walk back to Uma Punakha is around 45 minutes, going past Thodrup Lhakhang.

This morning’s touring is around 3-4 hours, with nothing too strenuous.

In the afternoon, perhaps try a spa treatment at the COMO Shambhala Wellness Therapy Centre or enjoy the afternoon walking village and nunnery visit which is around 4-5 hours of touring with some fairly easy mostly downhill walking.

The temple complex also houses a permanent higher learning and meditation centre for nuns, for both religious training and life skills. Nobgang Monastery, dating back to the 17th-century, was built as the residence for Zhabdrung Ngawang Namgyal, a Tibetan Buddhist lama.

Start the walk down and you’ll see the spectacular valleys, mountains and Punakha Dzong.

The hike goes through chir pine trees, passing the school, farms and farmhouses. You will come across an amazing tree (local people believe the tree is the walking stick of the ‘Divine Madman’ used during the 15th-century and planted upside down) before you reach the finishing point.

Retrace your steps back over the Dochu La pass for a second chance to view the Himalayan mountain range.

Returning to the Chuzom (the confluence of the rivers Wang Chhu and Paro Chhu), you can glimpse the three nearby shrines, built to ward off evil spirits – each with a different style of architecture: Nepali, Tibetan and Bhutanese. Time-permitting, there will be a visit to Tamchog Lhakhang, a temple built by Thangtong Gyalpo, a pioneering engineer who introduced the construction of suspension bridges into Bhutan and Tibet (several of which are still in use today).

The final part of the drive to Uma Paro is through apple orchards and rice paddies back to Uma Paro, where you can spend the rest of the day in this calming setting.

One popular option is to try your hand at archery, Bhutan’s national sport.

The driving today is around 3-4 hours.

Today enjoy a walk through pine forests high above Uma Paro to the pretty grounds of the fortress-like monastery of Zurig Dzong and traverse across to Ta Dzong, home to Bhutan’s National Museum, with magnificent views over Paro, and on down to Rinpung Dzong (Fortress on a Heap of Jewels).

The trail then leads across Paro Chhu (River) via the traditional covered bridge Nyamai Zam, and then past the main archery ground, Ugyen Pelri Palace and into Paro town.

Driving a few kilometres north of Paro, pay respects at Kyichu Lhakhang, one of the oldest temples in Bhutan with its magical orange tree that bears fruit all year round.

Time permitting, drive further up the valley to Drukgyel Dzong, built in 1648 by Zhabdrung Ngawang Namgyal to control the northern route to Tibet.

Today’s touring should be between 5 and 7 hours.

The historical Paro Valley is the focus of today’s activities, culminating in a visit to the Taktsang ‘Tiger’s Nest’ Monastery, one of Bhutan’s most important pieces of architecture.

According to legend, this cliffside is where Guru Rinpoche (Padmasambhava) landed on the back of a flying tigress, bringing Buddhism to Bhutan from Tibet.

The trip starts early in order to avoid the hot sun during the two-hour climb to the Tiger’s Nest viewpoint, a steep hike passing a waterfall and ending among beautiful murals at the monastery’s main entrance.

If time allows, there is the possibility of heading further up to visit remote temples.

After lunch – either a prepared picnic or from the charming Taktsang cafeteria - return to Uma Paro, and recharge on your final night, enjoying the steam rooms, gym and swimming pool or indulging in a COMO Shambhala spa treatments.

Today’s touring is around 6-8 hours and the walking is a little bit harder going today up to the Tiger’s Nest Monastery.

Arrive back in the UK

The stone-built villas are all completely private and each occupies its own glade planted with azaleas, rhododendrons, camellias and hydrangeas.

A stay at Uma by COMO, Paro is a very culturally immersive one, complemented by the comfort and style of COMO.

The location means that Tiger’s Nest Monastery, Paro and the museums, monasteries and markets of Thimphu are all easily accessible.

The dining at Uma Paro is highly regarded and the Bhutanese Royal family frequently make Uma’s restaurants their dining venue of choice in Paro.

Uma by COMO, Punakha, is Uma’s second boutique hotel in Bhutan, an intimate, luxury lodge in Bhutan located at the far western end of the lush Punakha Valley.

From this picturesque base overlooking a snake-like bend in the Mo Chu River, Uma Punakha is ideally located for exploring the remote Himalayan Kingdom of Bhutan.

Every room has sweeping views of the Punakha Valley and the Mo Chu as it winds its way through the rice fields and orchards.

With the COMO Shambhala Retreat offering a range of spa treatments, nestled in the hush of a woodland glade near to the hotel, a stay at Uma can be a journey of many dimensions.

The setting is really beautiful, on a bend in the Mo Chu River, shrouded in the alpine stillness of the Punakha Valley.

Uma Punakha is ideally located for exploring some of Bhutan’s most celebrated landscapes and historic sites, including the famous Temple of the Divine Madman and the imposing Punakha Dzong.

COMO’s second luxury hotel in Bhutan is usually combined with a stay at Uma by COMO, Paro in a two-centre Bhutan holiday.

Punakha is a scenic 5-hour drive from Paro, making for a straightforward combination with Uma Paro.

All of our Bhutan Holidays are completely tailor made and we can put together any kind of Bhutan Tour itinerary to suit your interests and budget.

Call us now to speak to a Bhutan expert about your tailor made Bhutan holiday.