Ask us for Details and Costs Now! 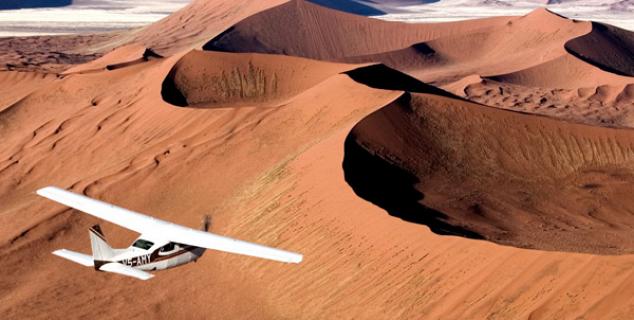 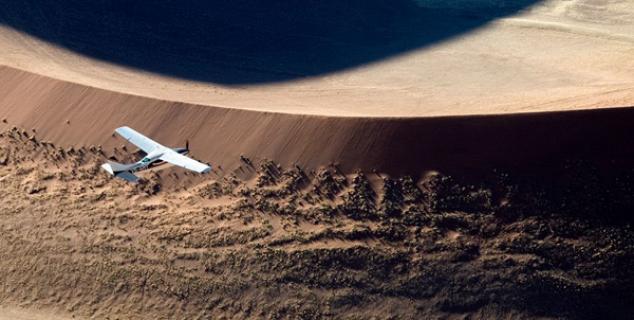 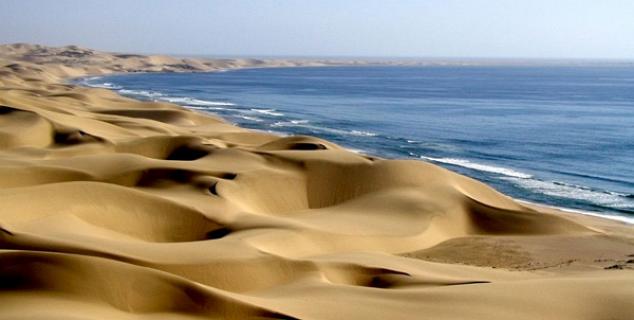 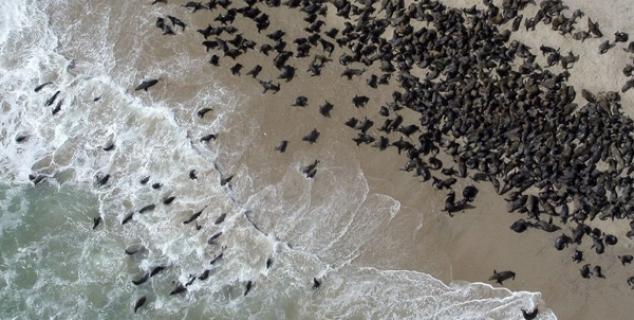 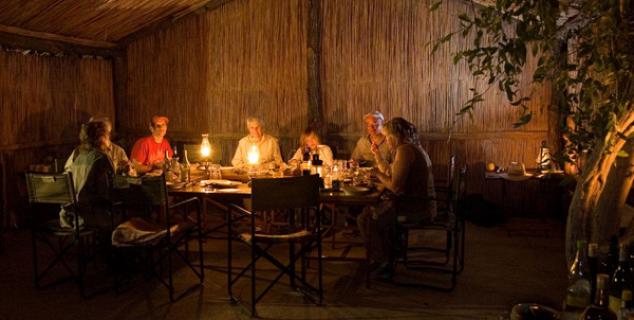 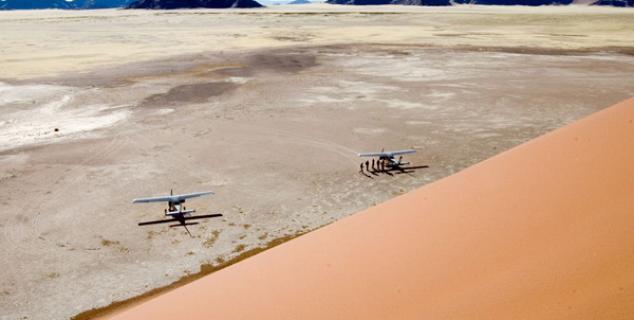 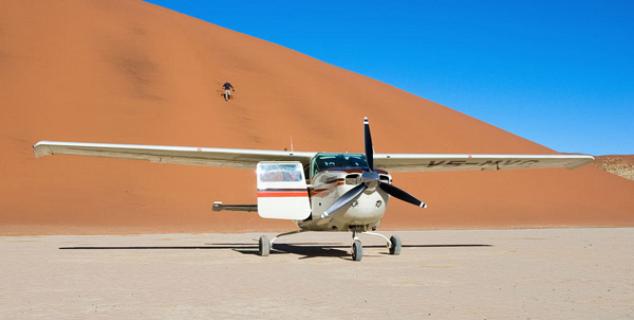 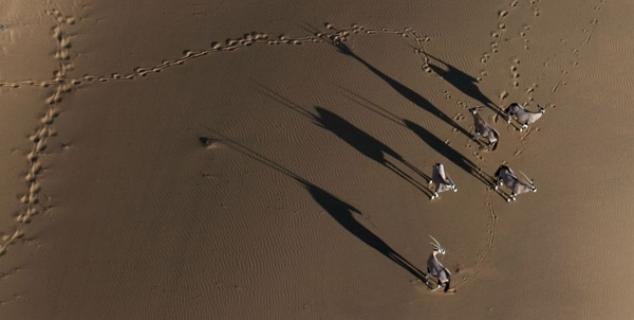 Stretching from the south of Namibia up into Angola, the Skeleton Coast and its hinterland is a landscape of haunting beauty, a vast area of rolling sand dunes, expanses of uninhabited desert plains, fossil beds, unique geological formations, desert-adapted animals and strange vegetation.

This scenic air safari by light aircraft is an unforgettable way of exploring the most dramatic landscapes, scenery and locations in Namibia.

Soar over windswept sand dunes, the seal colony at Cape Cross and the decaying hulks shipwrecks along the infamous Skeleton Coast.

In the far north visit a remote village of the nomadic Himba people.

Combine a spectacular Skeleton Coast Air Safari with a stay in one or more of Namibia’s luxury lodges or combine with a luxury safari in Botswana’s Okavango Delta or in neighbouring South Africa.

Fly from Windhoek to the Skeleton Coast via Conception Bay

The Kuiseb Canyon and adjoining red dunes are a spectacular sight from the air. The flight includes an aerial view of the famous Eduard Bohlen shipwreck at Conception Bay.

After landing and refuelling at Swakopmund, continue with a low-level flight north along the Skeleton Coast past the seal colony at Cape Cross for a light picnic lunch near the beach.

After lunch, cross the desert by aircraft to the Ugab formations, a nearly lifeless ‘moonscape' of numerous black ridges in stark contrast to the white desert floor.

From here proceed to Kuidas Camp in the Huab River Valley for the night.

Ancient rock engravings are found amongst the rocks within walking distance of the camp.

After breakfast depart by Land Rover to explore the colourful red lava and yellow sandstone of the Huab River environs and discover the ecological aspects of this area with its wide diversity of flora and fauna.

This includes the Welwitschia Mirabilis, a tree that has been dwarfed by the rigours of the encroaching desert climate.

Lunch is taken at Kuidas Camp before flying along the coast to Terrace Bay in the Skeleton Coast Park.

The most prominent shipwrecks along this part of the coast are the Montrose and Henrietta.

At the coast access the roaring dunes by Land Rover, which always proves to be a stimulating experience, and also visit the beach with its profusion of multi-coloured pebbles consisting of agate, lava, granite and quartz.

Interesting to see are old bleached whalebones scattered along the beach above the high tide mark.

Return to the aircraft and continue north to Leyland's Drift Camp in the Hoarusib Valley in the Kunene Region, for an overnight stay.

After breakfast embark on a scenic drive along the Hoarusib Valley to visit a settlement of the nomadic Himba people.

With luck, it may be possible to see the desert-dwelling elephant that frequent this valley.

From here continue north along the Skeleton Coast by aircraft to the Kunene River acting as a border to Angola.

The Kaiu Maru shipwreck and pieces from old sailing vessels lie scattered along this part of the coast.

From the airfield we take a scenic drive by Land Rover to a lunch site, before continuing through the mountains and dunes of the Hartmann Valley - which extends to the Kunene River - reaching Kunene River camp in the late afternoon.

Enjoy an early morning boat trip on the Kunene River as it flows through scenic desert landscape, observing birdlife and possibly some crocodiles.

Birds vary from aquatic species on the perennial waters, to endemic desert varieties and those that inhabit dense riverine vegetation.

After lunch at the camp, fly back to Windhoek, arriving in the late afternoon.

About the Skeleton Coast

Once upon a time the entire coastline of Namibia was called The Skeleton Coast. Today, the moniker mostly refers to the Skeleton National Park, which stretches the northern one-third of Namibia’s shore.

The landscape in the park ranges from wind swept dunes to rugged canyons with walls of richly colored volcanic rock and extensive mountain ranges.

The park’s ominous name is well earned given the scores of shipwrecks littering the beaches – the work of the Benguela Current, dense fog and rough surf.

Bleached whale and seal bones also are visible back from days when the whaling industry was still active. But despite its appearance, the Skeleton National Park houses a great variety of species with its borders – big cats, desert-adapted elephant, black rhino and many more.

Legendary in Namibia, the Schoeman brothers (pronounced "Skooman") have been operating Air Safaris in Namibia for decades and were in many ways responsible for initiating low-impact, sustainable tourism to the Skeleton Coast.

Louw Schoeman who began the business is credited almost single-handedly in getting the Skeleton Coast designated as a National Park in 1970.

Flying over the Skeleton Coast

The trip begins in Swakopmund and the aircraft used is a Cessna 210.

Space is tight on board and you will be able to communicate with the pilot via headphones (which helps cut out noise as well).

The beauty of the flight is that it can go so low over the landscape, offering an amazing perspective on the dramatic Skeleton Coast.

The Schoeman's are all expert bush pilots so you are in good hands.

Accommodation is in a tented camp set up the first and last night, with a very pleasant lodge on the second night.

Tents in the camps are fairly basic with bucket showers so don't expect anything too luxurious - no gold taps or silk sheets here.

Camp beds, battery powered lamps and bucket shower stalls constructed from reeds is the style in the tented camps.

The luxury in this trip though is the privilege of seeing this amazing landscape from such a unique perspective.

All of our Namibia Holidays are completely tailor made and we can put together any kind of itinerary to suit your interests and budget.